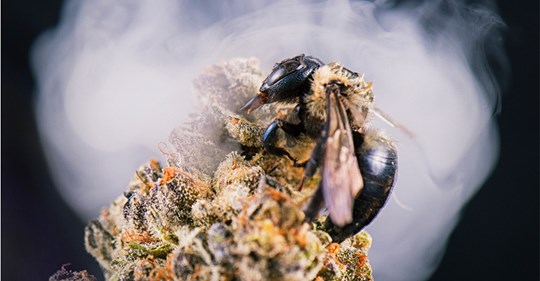 The study, led by researchers at Cornell University and published last week in Environmental Entomology, found that bees are strongly attracted to hemp crops. Its findings agree with a Colorado study published earlier this year that discovered the same thing.

Here’s what the latest study found. The greater the area covered by hemp, the greater the number of bees attracted to the area. Additionally, taller hemp plants increased the chances bees visited the plots, with the tallest plants bringing in 17 times more bees than the shortest plants. And as the study’s time went on, more bees increasingly visited the hemp plots, indicating the bees were letting their hives know where the good shit was.

Now, for the strange thing: Cannabis does not produce nectar, the sweet, sugary liquid secreted by many floral varieties to attract insects. Nor do most hemp flowers come in a wide array of bright colors, which also attracts insects. The researchers discovered that 16 bee subspecies flocked to hemp crops, and this was likely due to the pollen produced by male flowers. What, exactly, made hemp pollen so enticing remains unknown. Bees also seem uninterested in female flowers — the ones humans desire the most — since female flowers don’t produce pollen.

“The rapid expansion of hemp production in the United States… may have significant implications for agroecosystem-wide pollination dynamics,” the study’s authors concluded. “As a late-season crop flowering during a period of seasonal floral dearth, hemp may have a particularly strong potential to enhance pollinator populations and subsequent pollination services for crops in the following year by filling gaps in late-season resource scarcity.”

Bees are one of the most important — if not the most important — managed pollinators in US agriculture, spreading one flower’s male sex cells to corresponding female flowers, facilitating plant reproduction. The UN’s Food and Agricultural Organization estimated that, worldwide, pollinators are worth anywhere from $235 and $577 billion for their role in global crop production, with bees responsible for $20 billion of that estimation in just the US alone.

For instance, the entire almond industry is utterly dependent on bees for pollination, but other crops such as blueberries and watermelons are heavily reliant on bees, too. If you’ve noticed rising fruit prices at your local grocery store during the winter months, that’s partially because bee populations fell during the latter part of the year, with some dramatic drops occuring in the past several years due to pesticide use and mite infestations of managed hives.

And if you’re wondering if this means we could see bee-made weed honey some day, well, that’s already a real thing. A guy in France named Nicolas Trainerbees (not his real name) claims he figured out a way to get bees to collect resin from female marijuana flowers. As he explained to me a couple years ago, the bees take the resin back to their hives to make propolis, a waxy substance used to craft walls and seal off chambers within the hive. Hives produce and trap heat, and over the course of weeks, it’s enough heat to decarboxylate the weed resin in the propolis, which he calls “cannapropolis.”

Once Nicolas can get into the hive and remove the propolis laden honey — voila, he’s got THC-infused honey. No distillates or butane oils necessary.

Anyway, here’s to a new era of agriculture where weed, bees, and people come together to make some magic happen. With all the hype over recreational legalization, it’s easy to forget that cannabis has a ton of other incredibly critical uses, too.