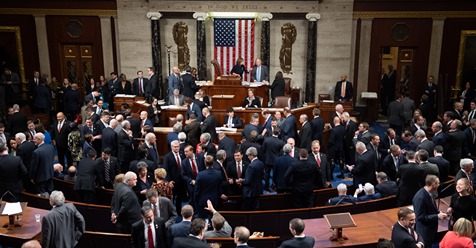 The House of Representatives attempted to pass cannabis reforms this month by attaching riders to spending legislation for fiscal 2020—only to see them get summarily shut down in the Senate.

The riders would have prevented the federal government from interfering with legal cannabis companies and eased their access to U.S. banking services, among other things the industry has said it needs to function properly.

Instead, cannabis businesses––which are fully legal in 11 states to date––will continue to face onerous levels of red tape and uncertainty well into 2020, despite their rapidly growing size and popularity among U.S. consumers.

One of the most significant riders to the spending package would have prevented the U.S. Justice Department from using taxpayer dollars to stop states and territories from implementing their own laws authorizing possession, distribution or cultivation of marijuana. That rider was tossed in favor of a long-standing one that protects only medical marijuana.

Today, the risks and fees associated with domestic banking send many established marijuana companies overseas and prevent cash-strapped startups from getting off the ground. Another proposal canned in Congress this month aimed to ease the companies’ access to capital markets by shielding U.S. banks that service those businesses from federal regulators, according to reporting by Marijuana Moment.

Earlier this month, House and Senate negotiators also did away with a provision to protect veterans who are legally employed by the cannabis industry from discrimination at the U.S. Department of Veterans Affairs when applying for home loans. That scrapped package also would have allowed those with single, low-level marijuana offenses to re-enlist in the military, according to reporting by Marijuana Moment.

In addition to taking the riders away, the Senate added an anti-cannabis rule that prevents Washington, D.C., which relies on Congress for funding, from legalizing marijuana or even reducing the criminal penalties associated with its possession, use or distribution, according to the Congressional Record.

All in all, it’s been a dismal year for federal cannabis reform, even though the vast majority of Americans want it legalized, according to the Pew Research Center. A bill introduced by Senator Kamala Harris and Representative Jerrold Nadler would have done just that, but it has been stalled since it cleared the House Judiciary Committee in November.

A package introduced this summer by Senators Cory Gardner and Elizabeth Warren would essentially recognize the activities of cannabis companies as legal in locales where marijuana was decriminalized by the state, but it has yet to clear congressional committees.

Yet another measure, introduced by Representative Ed Perlmutter, mirrors one of the Senate-rejected riders by ensuring access to financial services for legitimate cannabis companies. This bill passed the House with overwhelmingly bipartisan support in September but now sits on Senate Majority Leader’s Mitch McConnell’s desk along with hundreds of other bipartisan measures with little hope for a vote, according to a Newsweek report.

Bees Love Weed Almost as Much as We Do, Study Finds

Expect a shortage of marijuana once weed sales start this week