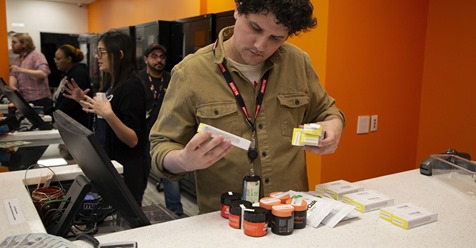 With less than 48 hours to go until marijuana shops open their doors to the public, operators are figuring out what to do if they run low on weed.

For months, dispensaries have been bracing for a shortage. Nearly every state that allows recreational marijuana has had stores run out or run low during the first days of sales.

Some Illinois dispensaries say they’re already having difficulty keeping enough weed in stock for the medical marijuana patients they currently serve. And demand for marijuana should only grow during the early days of recreational sales, when long lines of customers are expected to wait for hours in the cold. As Illinois dispensaries await their final shipments of marijuana before sales start Jan. 1, many are preparing to limit how much customers can buy as a way of managing supply.

“We’ve been planning ahead and stocking up,” said Neal McQueeney, principal officer of Midway Dispensary near the airport. “Since they signed the law, everybody’s been really working toward limiting the inevitable shortage … to make sure if you can’t get everything you want, at least you get something.”

Legal weed sales start Wednesday, but six stores in Illinois won’t be ready to open. Here’s why. »
Dispensary operators say marijuana flower, the dried buds that can be smoked, could be among the first items to sell out.

The marijuana industry has spent months preparing for the rollout of legal weed. Many of the state’s 21 growing facilities are expanding capacity, but construction takes time, and so does growing marijuana.

Bedford Grow started making plans to triple capacity at its growing facility in Bedford Park as soon as Gov. J.B. Pritzker signed the recreational cannabis law last summer, said Paul Chialdikas, vice president of sales and marketing. But the marijuana grown in the new space isn’t expected to be delivered to stores until April.

Map: Where to buy legal weed in Chicago and across Illinois »
In the meantime, the marijuana it provides to dispensaries is selling out almost immediately, Chialdikas said. The marijuana products he made available to dispensaries last week sold out in 12 minutes.

A year ago, a batch of Bedford Grow’s products would not have sold out, let alone in a matter of minutes, Chialdikas said.