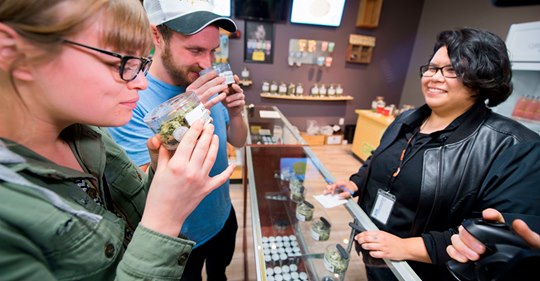 America’s war on drugs has cost an estimated $1 trillion since 1971.

It forces more than one million drug arrests per year, leaving more than half a million people currently in prison for drug crimes.

Increased law enforcement, using violent methods, has produced a corresponding increase in violent criminals dominating much of the drug trade.

But for all of that cost, there is no solid evidence that demand for narcotics has dropped discernibly over the decades. New drugs from crack to meth to opioids have come in and out of vogue, proving the “whack-a-mole” aspect of how new demands keep forcing law enforcement to readjust for different threats.

All of the above-mentioned results of the drug wars have long given even more conservative Americans pause when it comes to drug laws. That’s especially true based on the fact that incarcerations and arrests for drug possession, have been rising at a much faster pace than arrests and incarcerations for drug trafficking and more violent drug crimes.

None of this is anything new to the large number of Americans who have long supported new strategies to combat drug use. They have often emphasized treatment over interdiction and various levels of decriminalization or even legalization.

Of course, legalization, especially in the case of marijuana, has been in the spotlight for the past decade. Pot is now legal for recreational use in 11 states with three more states expected to join them in 2019 or 2020. Meanwhile, it’s legal to use marijuana for medicinal purposes in 33 states. Canada has legalized recreational use nationwide.

If you’re thinking that the emphasis has gone from zero tolerance for marijuana all the way to, “if you can’t beat ‘em, join ’em,” without taking any intermediate steps, you’re right on the money.

But legalization is hardly where it stops. In many cases, states aren’t just agreeing to look the other way or even just reap the tax benefits of legal marijuana sales. Instead, they’re actively encouraging the industry. Former House Speaker John Boehner has become a prominent spokesperson for the marijuana industry.

Some states, like Michigan, are even trying to help African Americans and other minorities get into the pot business as a form of some kind of “social justice” or payback for years of their communities being adversely targeted by drug law enforcement.

There’s just one question: what happened to just trying the decriminalization part? If you’re thinking that the emphasis has gone from zero tolerance for marijuana all the way to, “if you can’t beat ‘em, join ’em,” without taking any intermediate steps, you’re right on the money.

Having states or eventually, the federal government promoting the marijuana industry is problematic for a number of reasons. The biggest problem is the threat marijuana poses to teenagers and their cognitive development. A new warning on marijuana use for adolescents and pregnant women was issued just this summer by the U.S. surgeon general.

And make no mistake, much of the legal pot industry is marketing products to teens in the same way vaping companies and the makers of the hard lemonade and spiked seltzer have been accused of doing for years.

In fact, an Aspen Institute report issued just after recreational pot became legal in Colorado noted the many products and strategies local businesses were using to lure younger users. In states where governments spend money to encourage certain forms of marijuana entrepreneurship, it’s hardly a stretch to say that parents are seeing their tax dollars being used to at least indirectly market marijuana to their children.

We’re a long way from trying to simply right a wrong about over-incarceration for drug crimes now, aren’t we?

Speaking of the health risks, the same state of Michigan that’s pushing marijuana sales has also just imposed a ban on some of the most popular forms of vaping. It’s easy to get confused about government health priorities with that kind of mixed messaging.

Then there’s the question of just how effective legalization is at cutting down on the illegal drug trade. The Los Angeles Times reported last month that despite having the largest legal pot market in the country, California’s black market for marijuana is still growing.

Inevitably when anyone brings up these health concerns or any misgivings about the states promoting an intoxicating drug, that person is hit with a litany of arguments about how marijuana is no more harmful than alcohol and it’s not worth continuing to make it illegal.

But that’s not the argument here. Lifting blanket bans on the pot and ending unfair and costly law enforcement efforts to arrest people for marijuana possession is something a majority of Americans seem to support and rightfully so. The issue here is whether it’s wise, safe, or even fiscally responsible for the government to get into the marijuana business.

The answer to those questions aren’t clear, but they should give more of us a serious pause. One thing that is clear is that it’s disingenuous to use strong arguments for decriminalization as an excuse for aggressive state-supported drug use.

It’s even more dubious for our government to go from blacklisting marijuana as a total evil to promoting it as an economic and social panacea.

3 Important Things that Happened in the Cannabis Sector This Week

As Illinois Prepares To Legalize Pot, Public Housing Tenants Not Allowed To Partake