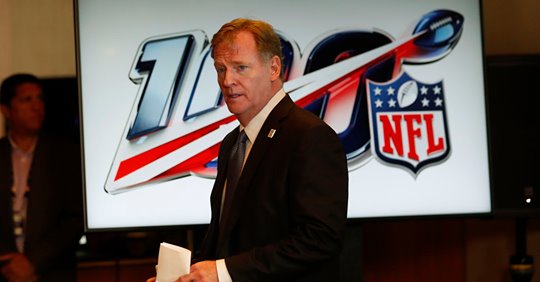 NFL owners emerged from their annual fall meeting this week in Fort Lauderdale, Fla. with many of them still willing to reduce Roger Goodell’s authority in player discipline and to make concessions to the players’ union on the sport’s marijuana policy as part of a push for an agreement on a new labor deal by March.

The level of support for such concessions to the players in the labor negotiations was characterized as strong by several people familiar with the sentiments of ownership.

It’s not clear if such concessions would lead the NFL Players Association to agree to other changes, such as the owners’ push for a 17-game regular season or the overall division of revenue between the two sides under the salary cap system.

According to those familiar with the owners’ views, a large number remain willing to allow players’ appeals of discipline for off-field misbehavior to be resolved by a neutral arbitrator. Goodell would retain the authority to resolve appeals of discipline related to integrity-of-the-game issues.

Players and NFLPA leaders have been critical in the past of Goodell’s near-complete authority in player discipline. The NFLPA went to federal court in disciplinary cases involving Tom Brady in the Deflategate scandal and Dallas Cowboys running back Ezekiel Elliott involving allegations of domestic violence. But in both cases, Goodell’s authority ultimately was reinforced by the lengthy court proceedings.

Roger Goodell says NFL must ‘do everything to improve officiating’

It is not clear, though, how important the discipline issue is to the players’ side in the CBA negotiations. In previous sets of labor negotiations, that issue has not been enough of a priority to lead the union to make significant concessions in other areas.

Likewise, it’s not clear how meaningful any concessions on the marijuana policy would be at the bargaining table. Owners are willing to make that policy less punitive, according to those with knowledge of ownership views. The league and union already have formed a pain management committee to study, among other topics, the use of marijuana for pain management.

Goodell and Pittsburgh Steelers owner Art Rooney acknowledged Wednesday in Fort Lauderdale that owners are seeking to lengthen the regular season from 16 to 17 games. That would be accompanied by a reduction of the preseason and, possibly, by an expansion of the NFL playoff field from 12 to 14 teams.

The NFLPA vehemently opposed a longer regular season during the negotiations leading to the 2011 labor deal and appears to have remained so during this round of bargaining.

The league and players are said to have made relatively little progress thus far toward resolving the central economic issue of the division of revenue. Representatives of the two sides have been meeting in hopes of avoiding another work stoppage like the lockout that preceded the 2011 deal. That 10-year deal runs through the 2020 season. There has been speculation about the possibility of a deal before season’s end, but some within the league seem to regard March as a more realistic target.

“The discussions have been consistent,” Goodell said Wednesday. “We’ve had very open dialogue. We all know the various issues. I think it’s been productive. I don’t know how to gauge when or how soon. I’m hopeful that we all see the benefits of doing something earlier and that we can get something done.

Expect a shortage of marijuana once weed sales start this week